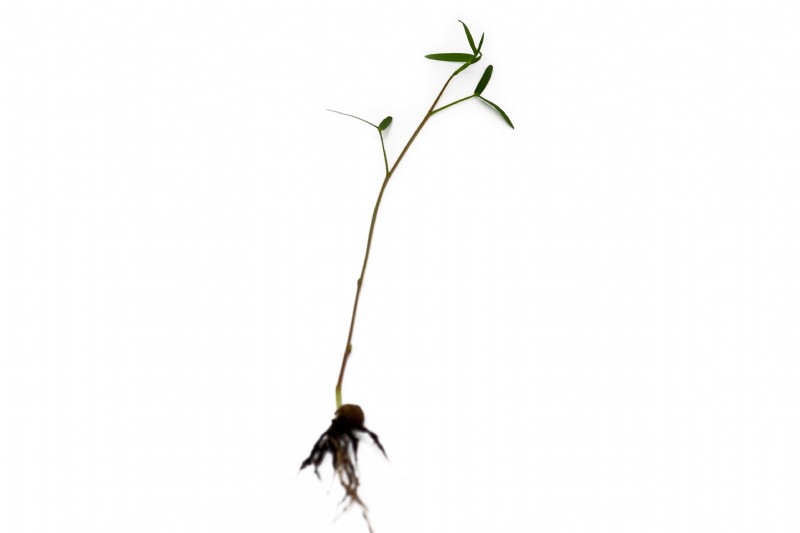 Used as an over-winter green cover and soil improver, it can also be grazed by livestock.

An annual species, normally dying away after flowering.

Vetch is extremely competitive against weeds, forming an aggressive canopy rapidly. Vetch is also a nitrogen fixer with estimates of annual N fixation ranging from 100-250kg N/ha. It will provide a high protein, palatable forage.

A large seed, so it must be sown at a robust rate, to get a decent cover in the field.

10% - 30% vetch inclusion in a whole crop mixture with cereals and or peas. With an overall rate of 75kg per acre / 187.5kg per ha. It may also be included in a mixture with ryegrass as a silage crop at 17kg per acre / 42.5kg per ha, to increase protein content.

Sow in the spring as part of a whole crop mixture, but can be autumn sown for over winter cover or grass silage mixes. Of all the legumes it has one of the latest sowing windows in the autumn.

Its growth is vigorous enough to compete against weeds without the need for cutting. Generally vetch has few pest or disease problems. Sitona weevil can attack it during its early stages, but this generally has little effect on the subsequent success of the crop. Pigeons can sometimes set back the development of the crop if there is little else for them to eat. There is a suggestion that growing vetch results in fewer slugs in the subsequent crop, although further work needs to be done to verify this.

Seed
Vetch is a smooth, rounded and spherical seed. It has a black or mottled brown colour and is 4-5mm in length, which is similar to a pea seed.

Seedling
The cotyledon remains buried during germination. The first true leaves have one pair of narrow shaped, medium to long leaflets.

Flowering Plant
The plant is dark, glossy, green in colour, with long, squarish stems, eventually reaching 2 metres in length. The leaves are pinnate in their structure with 2-10 pairs of opposite leaflets, these are narrow, ovate and square towards the tip. The stipules at the base are small and divided, clasping the stem. The shape of each leaf is gently tapering in overall shape towards the apex. Each leaf has 2-3 tendrils at the apex which gives the plants its sprawling, climbing ability. The flowers are generally purple in colour, arising on short peduncles from the base of the leaves, later producing an obvious seed pod. It has a shallow but strong root system, with numerous lateral branches.

Average number of seeds per kg 18 000. Average protein content 16-25% depending on plant growth stage. Vetch can carry over or act as a host to some disease that affect peas and beans. It can be affected by fusarium which can cause root rot in both pulse crops. It is also a host for ascochyta and can carry over botrytis.

A mixture of westerwolds ryegrass and vetch is an economical, effective option for over-winter soil management. Sowing should take place by late September. The mixture can be incorporated in April or May. (For livestock farms it may be left and made into silage in late May.) Westerwolds ryegrass will regrow after cutting so can be left through the summer for further cutting or mulching. Vetch can be used with a cereal component like oats or barley as part of a whole crop mixture, to reduce lodging issues later in the season.

You can find Vetch in the following mixtures

The key to successful over-seeding is to reduce the competition from the existing sward as much as possible, before ...

Plant green manures in April to 'Sort Out Your Soil'

April is the ideal time to plant both long and short term green manure crops. The shorter term green ...