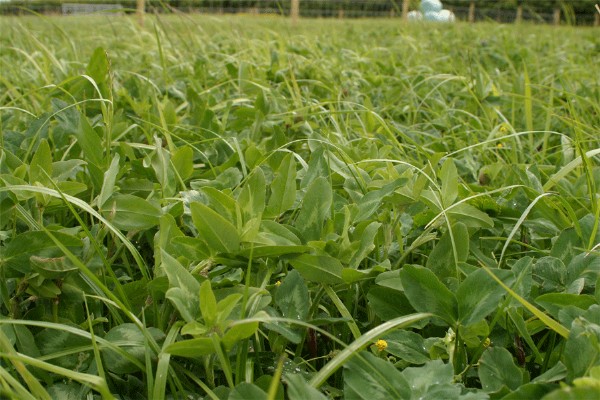 How to recognise and control problems in newly sown leys
Failure to establish a vigorous, even cover soon leads to patchiness, the subsequent invasion of weeds and the rapid decline of the sward. Consequently it is essential to ensure that as many of the seeds as possible germinate, establish quickly and grow rapidly. To get the seedlings off to a good start, attention must be paid to correcting any deficiencies and this includes liming where necessary and providing adequate levels of N, P and K.

The time of sowing is also important. In central Southern England spring sowings should be made in March-April and autumn sowings in mid August – mid September. It is far too late to sow white clover after early September for it to be reliable. Also, producing a fine firm seedbed encourages the young seedlings to establish, grow quickly and be better able to withstand attack by pests and diseases. Heavy rolling closes the nooks and crannies in which slugs lurk and crushes leatherjacket burrows, making life more difficult for them.

During the establishment phase, little green material is present and pest and disease attack is concentrated on it. Several pest species including slugs and leatherjackets attack grass seedlings. More important than these though are the larvae of frit fly. The only disease of significance to grass seedlings is Fusarium culmorum. Red and White clover seedlings are attacked by sitona weevils and slugs, but diseases seem unimportant.

Frit fly
By far the most important pest of newly sown perennial and Italian ryegrass is the frit fly. Damage usually appears as patches of seedlings within the sward emerging poorly and growing only slowly. Affected seedlings often appear weak or stunted. The larvae which cause the damage can be seen by the naked eye, but only after careful laboratory dissection of a sample of tillers. It is not practicable to search for and count larvae in the field.

Grass seedlings are at their most attractive to egg-laying females when they have 2-3 leaves. Unhappily for farmers, in autumn, seedlings often reach this stage at about the time the frit adult population reaches its peak. Eggs are laid on and around the seedlings and the minute larvae burrow-in and mine within the base of the developing plants. Larvae can also burrow-up from the ploughed-in turf of a previous sward and infest the re-seed (or a following cereal crop). In direct drilled grass, frit larvae migrate easily from the desiccated remains of the old sward to the emerging seedlings of the re-seed and cause great damage.

There are three generations of frit fly each year. Adults of the third generation are on the wing in August/September and it is larvae arising from eggs laid by them that cause the damage. Dow AgroSciences in collaboration with IGER have produced a risk assessment chart that gives clear guidelines on when to use chlorpyrifos (eg. Dursban 4) at full or half dose rate to control frit fly. Clover, timothy and cocksfoot are not affected by frit fly. The major risks are perennial and more especially Italian ryegrass. Spring sowings are seldom if ever affected but sowings made in autumn are usually damaged to some extent. There is a major risk to swards sown in mid-late August. Direct drilling almost always leads to significant damage by frit larvae (even in spring sowings) which migrate easily from the old desiccated sward to a reseed.

Leatherjackets
The risk of damage to newly-sown grass and clover by leatherjackets stems from these large insects surviving seed-bed preparation and being carried forward from the previous crop. Clearly previous cropping history will have an important bearing on this carry-over. There are likely to be few or no leatherjackets in a previous arable crop and the risk to a sward following them will therefore be very low. However, established grassland is often heavily infested and there is a far greater risk. Symptoms of damage are bare patches appearing in the new sward often associated with large numbers of birds (especially crows, rooks and starlings) probing for the larvae. The larvae area dull olive green, with no distinct head and no legs. They may be up to 35 mm long and have a rubbery feel – they are difficult to squash between thumb and forefinger. Again Dow AgroSciences have produced a risk assessment chart and this gives clear advice on when the application of chlorpyrifos may be necessary. Leatherjackets may also feed on and damage clover seedlings. The risk of damage by leatherjackets is greatest when grass follows grass especially if the interval between crops is less than two weeks. Problems are also more likely in predominately grassland areas and where damage has been noted on previous occasions.

Slugs
Slugs are voracious feeders and may destroy grass or clover seedlings. Damage caused by them is patchy. A tell-tale sign of attack is the slime trails that they leave behind. Since they are nocturnal, a visit to the field after dusk with a torch will reveal their presence. Prevention is better than cure and is best achieved by producing a fine, firm seedbed with no cracks, crevices or clods where they can lurk. Exposed on the soil surface with nowhere to hide slugs soon fall prey to birds and various mammals or they simply desiccate. Should chemical control be needed there are several propriety products available based on methiocarb or methaldehyde.

Weevils
Sitona weevil larvae attack the root systems of mature red and white clover plants, but the adults attack seedlings as well as leaves of older plants. The adults which are the size of a match head can graze seedlings down to a stump. There are no chemical control methods approved specifically for the control of sitona on clover seedlings, but chlorpyrifos (e.g. Dursban 4) applied to control frit fly or leatherjackets in accompanying grass seedlings will also control the weevils.

Fusarium culmorum
Spores and other propagules of this disease are present in virtually every crumb of soil in the UK. All that is needed for this pathogen to become a problem is a susceptible host e.g. ryegrass and appropriate environmental conditions (dry and warm). The disease attacks seedlings after germinating, but before emergence. The only symptom of attack seen in the field is the failure to emerge of many seedlings. Extensive work by IGER has shown that on average across a wide range of soils, sowing dates and sites on average some 20% of ryegrass seedlings are killed by Fusarium. Sowing deeply and in dry conditions exacerbates problems and a good methods of avoiding problems is to sow shallowly (1cm) and when the soil is not dry.

When is too late to sow?