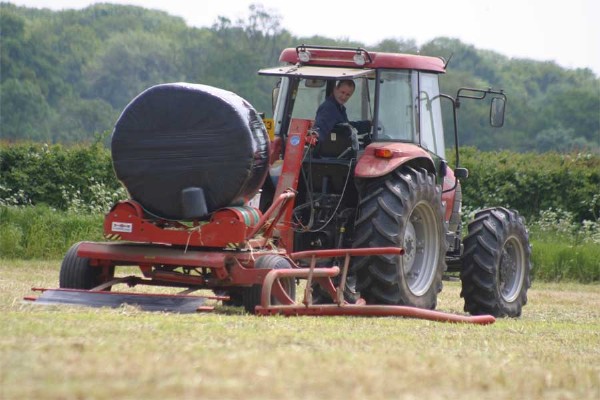 Silage is made on most farms but, surprisingly, less than half conserve it in the form of wrapped bales. With this is mind we asked Nigel Ford of All Things Rural to set out the basic ground rules for anybody considering introducing balewrapping technology to their farming system.

Producing silage is no longer considered just another seasonal job but is now regarded as a highly developed science that requires care and attention.

During the 1970’s the first polyethylene silage bags were used in the UK. Results were variable, due to excess air left inside and difficulty sealing the neck of the bag. Around 1985 the benefits of wrapping silage bales in balewrap stretchfilm were recognised and launched in the UK on a large scale. They quickly replaced the laborious system of bagging. The machinery steadily improved and led to the latest generation of automated wrappers. The system has proved popular and now accounts for an increasing share of the total silage market.

Why preserve by wrapping
Each wrapped silage bale is in effect an individual silo. This means that each crop can be harvested and preserved individually according to its maturity as opposed to bulk silage, where crops of different nutritional values are likely to be together. This enables material of high yielding autumn calvers whereas lower value crops would be better suited to dry cows.

The wrapped silage system is very flexible. Bales are easy to store and can be left in several locations around the farm. The likelihood of effluent is extremely small because each bale is sealed and usually has a higher dry matter content than clamped silage. Of course, compared with haymaking the results are less dependent on fine weather. Additional investment in wrapping machinery may be required but these initial costs can be avoided by using contractors.

Wrapped silage is transportable and therefore can provide a cash sale in times of surplus. Where summer grass is scarce it can prove invaluable. Bale wrapping is an ideal way to preserve surplus silage on farms where bulk storage is in use and the clamps are full. In these situations it can also be useful when only a few animals are being fed, when it would not be ideal to open the clamp.

When crops are cut early and there is a balance between energy and protein they will have a high nutritional value. Timing of harvest is critical. Normal sugar-rich grass crops, intended for silage will give good results. On the other hand, the practise of wrapping late cut hay to save it from rain can result in extensive mould spoilage.

Clean crops are of vital importance to producing hygienic forage. Contamination can have a disastrous effect, even in a completely oxygen free bale. Losses can be extensive if fungi are exposed to air inside the bale allowing moulds and spoilage to occur.

For example, even a dead rabbit can cause contamination if picked up in the bale and represents a danger of the very toxic poison, botulin, an anaerobic organism that thrives in the absence of air. This is a high risk with bales of low dry matter content. Feeding this silage can have fatal consequences.

Farmyard manure spread at the wrong time can also create problems and applications are best carried out before the crop starts actively growing.

One of the ways to prevent the growth of undesirable bacteria is with the correct degree of wilting and the careful use of suitable additives. By ensuring the bales are as dense and well shaped as possible, so that the air spaces within are small, fungal growth can be minimised. Whole crop and maize has been successfully wrapped but it is generally more difficult to compress these ‘coarse’ crops sufficiently with existing balers.

Mowing and wilting
The timing of cutting is important to retain nutritional value and also to enable the baler to adequately compress the crop and produce a dense, well-shaped bale. Although the weather will determine time of cutting, mowing should take place just as the seed heads start to appear on the grass crop.

Once the crop has been cut, moisture will be lost through evaporation. Moisture loss is greatest during the first hour or two immediately after cutting and it may be desirable to cut and spread grass before rowing up. However, it is important not to contaminate the forage with soil and other debris as this will lead to poor quality silage.

In favourable conditions, the aim should be for a wilting period of no more than 24-36 hours. Do not leave the swath for more than 2-3 days but if this is unavoidable a suitable additive should be used. In damp, warm conditions moulds grow rapidly in the swath.

Wilting is one of the most important phases of successful baled silage making. It is important both for good fermentation and sufficient bale density. A DM content of between 35-45 per cent should be obtained to get good results. For wrapped silage, there should be no need for additives beyond 40 per cent DM. if moulds do occur under these conditions; they are likely to be because of poor wrapping or damage to the film after wrapping.

Wilting also affects bale density, which is directly related to the degree of compression. During the short period of time involved in compression of the crop no baler can dehydrate the plant entirely. However, if the cells have already been dehydrated, the baler then has a good chance of producing dense, well-shaped bales.

It is important to bear in mind that though some bales of low dry matter may be heavy; they are not necessarily dense. Correct DM content is essential to minimise labour, machinery and film costs. Well-wilted bales keep their shape after good compression and can be stacked without problems.

Additives
Where weather conditions are not good and the crop is deteriorating rapidly, an attempt to salvage as much as possible must be made. Wet crops are at high risk of bacterial growth. This is where additives come into their own.

Formic acid is an organic additive that hinders the growth of negative micro-organisms and decreases the pH level of the crop.

Salts of both inorganic and organic acids are available for application in powder and liquid form. Sodium nitrate and hexamethylene tetramine will help prevent microbial growth, especially that of clostridia. Molasses, a natural product containing 50 per cent sugar, is added to stimulate lactic acid production by boosting the existing level of fermentable sugars. It is safe to handle and being of a high density, it has a positive effect on bale density by filling in air spaces. The crop should be wilted to DM content where there will be no effulent.

The use of inoculants, which are freeze dried lactic acid producing bacteria, has become common in recent years. The idea is to add a high concentration of the bacteria in a water solution when baling.

The Stretchfilm
Stretchfilm for bale wrapping must be of high quality in order to meet a number of requirements. It should include UV stabilisers to avoid film degradation in strong sunlight and have a high level of tack to help ensure the cut end sticks to the bale and the seal remains intact during storage.

Trials have shown that lighter coloured film such as pale green or white reflects more sunlight than black film, which absorbs it. This can cause great variations of temperature within the bale and nutrients can be damaged as a result. Also lighter coloured film has fewer tendencies to overstretch in hot weather ensuring better overlap in film layers.

By tightly applying 6 layers of good quality stretchfilm the circulation of oxygen is considerably reduced. The resulting lower nutritional losses are reflected in savings, which can be considerable when compared with the cost of the film.

Handling and Storage
Careful handling and storage of bales is important to ensure that the film remains undamaged and tight. It is useful to remember that the overall thickness of 6 layers of film will only be about 0.1mm. To protect the film, a purpose built handler is therefore necessary.

Round bales are best stored upright, as there is much more film on the flat ends for protection. Bales of high low dry matter should be stored in single layers to avoid pressure on the seals of the lower bales if they are stacked.

If the film is to remain tight and undamaged bales must be protected from birds and other animals. A storage site away from trees should be selected and a bed of fine material such as sand should be used as a base. If the site is in a field with farm animals a fence should be erected around the bales.