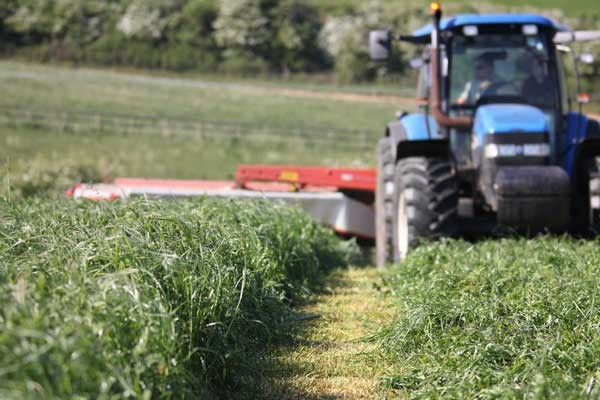 Kevan Windridge, Manager at M D & S Oughton Ltd, Rectory Farm, Lower Swell, Gloucestershire, is very pleased with a new ley sown in the autumn,  which included vetches. The new 50 acre ley is ryegrass, red clover and vetch and has already yielded the first silage of the year after a cold winter and dry spring, with the cut taken 2 May.  A very early first cut in this area which will feed his large dairy herd.

The mixture planted was Cotswold Seeds standard three year Milvus red clover ley (9kg/ac ryegrasses and 3kg/ac milvus red clover), plus the addition of 10kg/ac vetch. Mr Windrush is a conventional farmer, and believes that changing his farming system to utilise the benefits of legumes such as red clover and vetch will, so the ley is also part of the arable rotation. The ley was sown in September, topped early in the the year to control annual weeds and received dirty water this spring. A further two cuts are planned this year.

Whereas other ryegrass leys have been backward this spring on dry soils, the deep rooting legumes in Mr Windrush's mixture have resulted in excellent silage yields, with high quality expected once analysis is carried out.