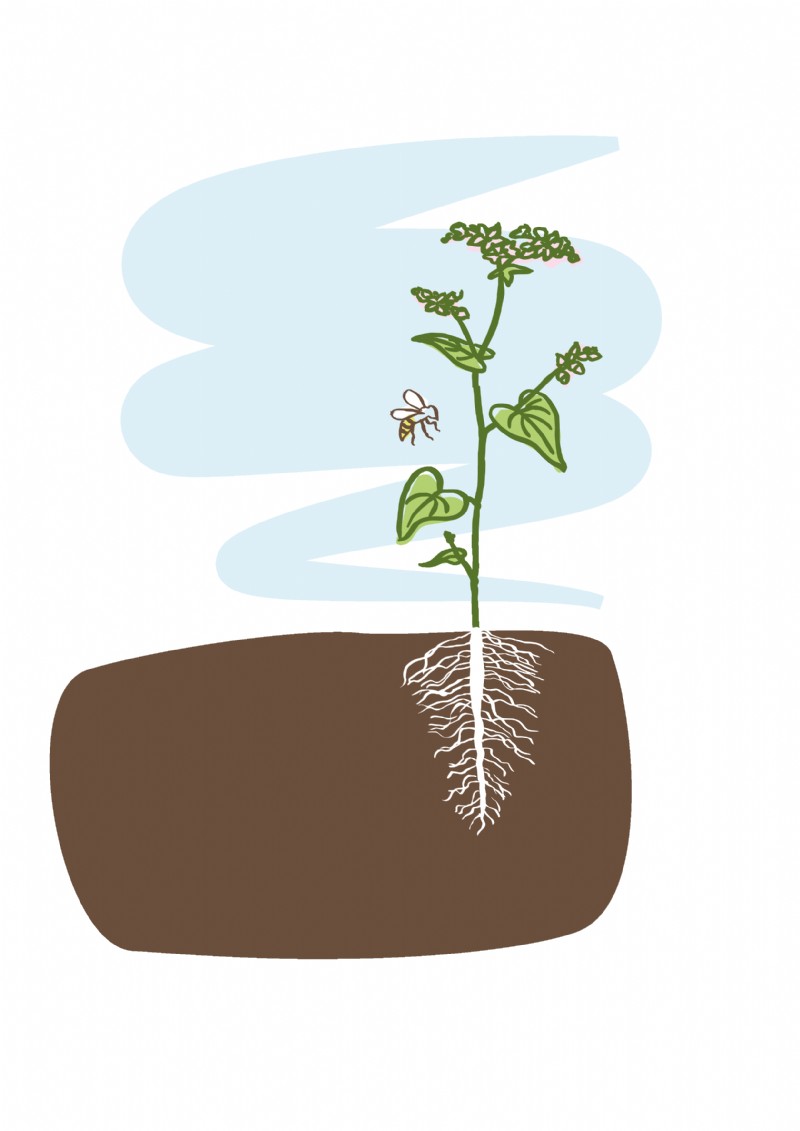 This is a short term, aggressive weed suppressor. It is good at scavenging for phosphate in the soil, breaking it down and then making it available to subsequent crops after incorporation. It's especially useful in soils that suffer from phosphate lockup. With its quick growth, the plant can establish from seed in 8 - 10 weeks.

A short term, ground covering, soil improving species and a pollen and nectar source for bees and other beneficial insects.

This is a quick growing annual species.

Buckwheat is one of the quickest growing soil improving species, this means that it can be utilised in narrow gaps within the rotation, producing dense green cover quickly. It is a useful source of food and cover for pollinators and invertebrates, as well as deer, geese and ducks. Although there is still work to understand buckwheat's affinity with phosphate, current understanding is that the root zone around the plant is slightly acidic, helping it breakdown 'locked up' phosphate in alkaline soils, making it more available to other crops.

Buckwheat has very poor frost tolerance and will break down at the first sign of frost.

Buckwheat grows vigorously and will produce relatively large amounts of biomass if allowed to grow throughout the summer.

The rate above is for a pure stand, the sowing rate is reasonably high because of the large seed size.

Buckwheat can provide a quick growing nurse crop for slower to establish species.

Any time after April or May when there is no risk of frost.

Flailing buckwheat will normally kill it off, however frost kill is also a useful tool to terminate buckwheat. Be aware that grazing livestock, especially pigs, but also sheep on dense stands of buckwheat can cause issues with skin hypersensitivity known as fagopyrism.

Seed
This is a distinctive looking seed, with an angular prism like shape. It has a dark brown colour, with a noticeably shiny texture. The seed size is approximately 4 - 5mm.

Seedling
The buckwheat produces a pair of cotyledons on a long crimson to pink coloured stalk. The cotyledons are a rounded, blunt kidney shape, with a waxy texture. The first true leaf has the characteristic arrow shape, with a more translucent, pale coloured stem.

Flowering Plant
Normally pale to dark green in colour and hairless. The stem is hollow and reddens as it matures. The plant has an upright, erect growth habit, with cordate to arrow shaped leaves, with smooth margins. The flowers are white or pink in colour in branched clusters. The roots are shallow, but with a dense cluster of lateral, side roots.

It can be combined with other quick growing species like mustard, to provide ground cover. It may also combined with seed bearing species for over-winter bird mixtures, but it will die by late autumn.

You can find Buckwheat in the following mixtures

In old agricultural textbooks, buckwheat has been used as a nurse crop for summer sown grass leys, the large leaves and quick growth, shade and protect the ley while also conserving moisture. But be mindful of grazing the stand in the year of sowing, an alternative option would be to flail the nurse crop in the autumn.

Suitable soils and optimum pH Over-seeding can be beneficial on most soil types. Routine monitoring of pH levels will ...

When an old ley becomes tired and it’s time to plough up and reseed to improve productivity, several well known ...