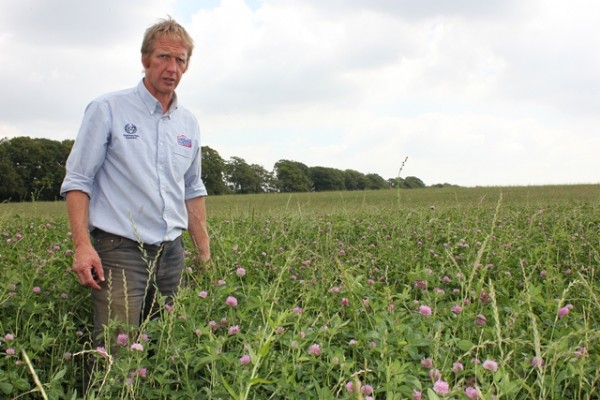 On Rob Richmond’s free-draining Cotswold Brash, ryegrass just doesn’t perform. The Herbal Ley is what stands between this dairy farmer and ‘a very big feed bill’. His 200 autumn-calving Friesian and Shorthorn cattle graze outside every day of the year, with the herbal leys in use from April to November and root crops filling the gap.

Mr Richmond started experimenting with herbal leys seven years ago when he arrived at the farm, in search of a mix that would consistently produce substantial amounts of forage on drought-prone soil. He has tweaked the mix over the years to meet the exact circumstances of his farm and cattle. This has meant adding creeping grasses such as rough and smooth stalked meadow grass which knit together the sward, carrying the cattle even during the winter. The mix of grasses and legumes in the ley also ‘feed the soil’, adding substantial amounts of N and organic matter.

Herbal leys are left in for up to seven years and Mr Richmond has found that the dominance of red clover in the first couple of years means he has had no real weed problems. After the leys have been in for a few years species such as trefoil, chicory and plantain come through more strongly, as does cocksfoot which, as regularly grazed, always keeps leafy.

The dairy cattle get a fresh bite twice a day after each milking. As herbal leys stay leafy for longer than ryegrass alone, they are grazed at a more mature stage, with cows going on to swards when they are 30-50cm high, grazing them down to 3-4cm. Mr Richmond finds a plate meter does not work accurately on diverse swards, so uses his experienced eye to judge how big a strip to allocate when moving the electric fencing every day. On average 100 milking cows get through around two acres a day, and 100 dry cows around half an acre a day.

Voluntary intakes are very high as the species contained are so palatable and this, combined with the high fibre content, contributes noticeably to herd health, as do the micronutrients brought up by the deep-rooting elements such a chicory.

After grazing the herbal leys once in early spring, fields are shut up and one or two silage cuts then taken before the leys are grazed a further three or four times before winter. Slurry is added once or twice annually, usually at around 3000 gallons per acre, generally in early spring and again in the autumn. Even in a difficult growing season the leys have yielded about 10t per hectare of dry matter with no costly inputs. 2011’s clamp silage is 11 ME and 16% CP, despite getting wet post cutting. Again, this helps keep the feed bill down with cows being fed just 800kg of cake each annually with over 70% of milk yield achieved from forage alone, even in dry years.

Mr Richmond speaks very highly of herbal leys, although he says a change in mindset is needed as you have to ‘get over it looking untidy’ in comparison to simpler swards. That adjustment is nothing compared to reliable year-round forage on his dry soil.