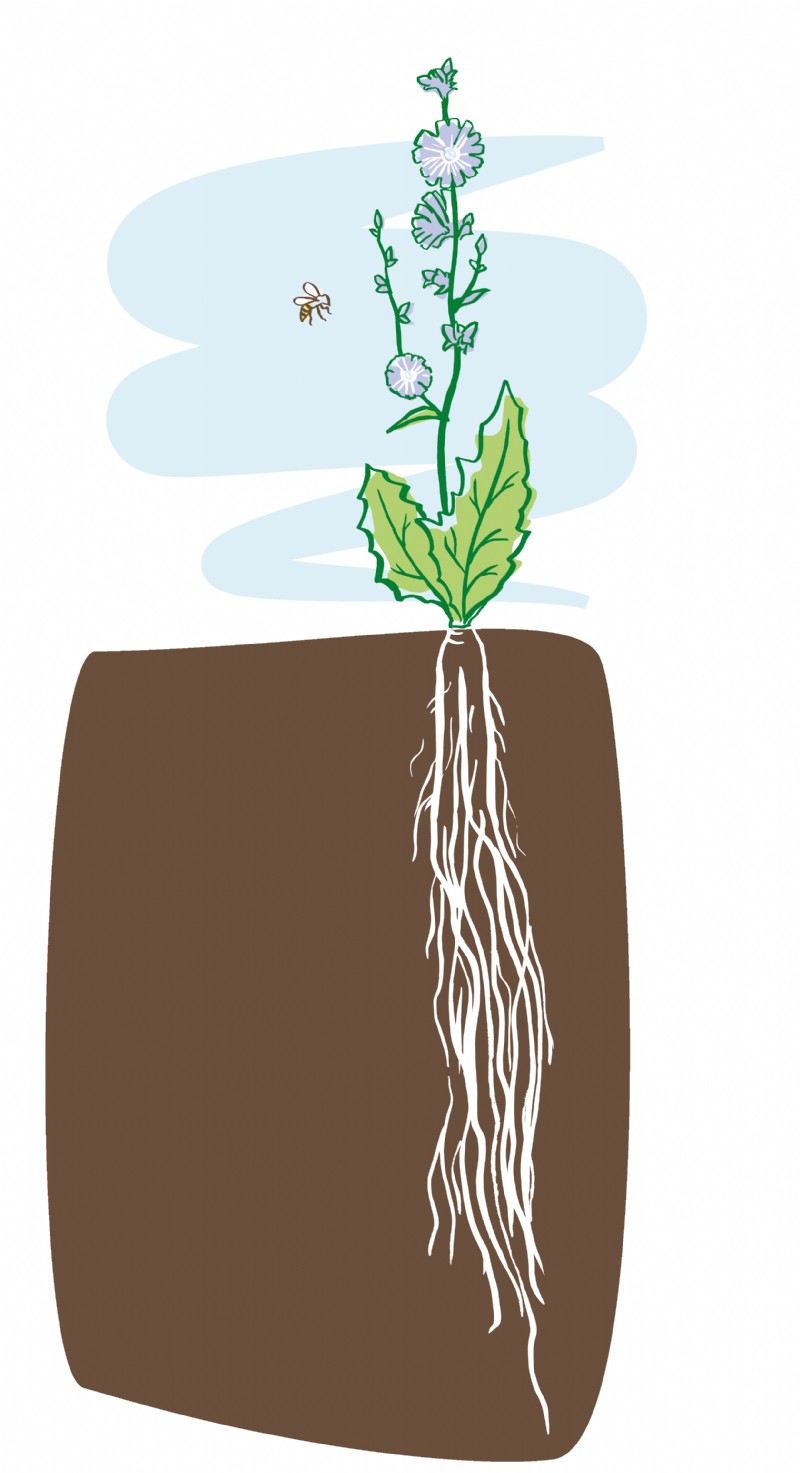 Chicory is an eye catching, mineral rich forage herb that has a long taproot capable of penetrating to great depth, breaking through plough pans and leaving the soil aerated, aiding drainage and crop root development. It’s frequently used in combination with other species as a soil improving species and is commonly used as an addition to grazing leys due to its high protein content and its ability to fatten lambs. It is also a known anthelmintic species.

It can be used as a constituent of a grazing ley. It’s frequently used in combination with other species as a green manure to improve soil health and aid drainage.

Chicory reliably lasts 3-4 years but can last for up to ten when not over grazed. In order to get the full effect it should be left in situ for at least two years.

Chicory makes excellent forage for fattening lambs, with a protein content of around 17-18%, making it comparable to the true clovers. It has anthelmintic properties, making it useful to ruminant livestock farmers, looking to reduce the worm burden, especially in sheep and lambs. Its deep taproot help it to break through layers of compaction and aid drainage.

Chicory is tolerant to frost.

Chicory is a small seed and should be shallow sown at around 1cm deep. The soil should be rolled after sowing to increase soil moisture contact with the seed.

It is important to sow into a warm seedbed either between March and early May or in the autumn between August and early September. Sowing later than this is risky as chicory is relatively slow to establish when conditions cool down.

Initially weeds can be a problem during establishment, but most annual weeds will disappear once a mowing or grazing regime becomes established. Chicory will need topping regularly at around three week intervals to control growth. Alternatively it can be grazed by sheep or cattle and makes an excellent forage. Be aware that from year 2 onwards chicory will develop a woody stalk and seed head if left unmanaged.

Seed
The seed is thorn like in shape, with 3 distinct surfaces, its wider at one end and tapering to a blunt point. It is light brown to black in colour, with a shiny to glossy surface texture. It is less than 3mm in length.

Seedling
The seedling is typically two equal sized, rounded to oblong cotyledons, the first true leaves are longer with wider lobes forming at the end of each leaf and the beginning of toothed edges, bristle like hairs and the mid vein at the centre of each leaf can be seen.

Flowering Plant
A leafy green plant, that grows from a basal rosette. In the first year it develops large salad like leaves, they can be lobed or bluntly toothed around the margins, the upper part of the leaf is undivided. Each leaf has a prominent often hairy, midrib. The flowers are an eye catching cornflower blue colour. The plant produces a strong, deep taproot.

Average seeds per kg - 830 000. Average protein content 18%. This is a plant species with many attributes, however if included in a mixture intended to be cut for hay, chicory stems can become woody later in the season from year two onwards, possibly leading to some rejection in the feeder. If left to go to seed over the winter, the seed it is a particular favourite with Goldfinches. Normally flowering from July to September.

Chicory is ideally combined with a grass sward and/or other forage herbs like plantain, yarrow, burnet and sheep's parsley.

You can find Chicory in the following mixtures

Traditionally when cultivated the leaves of chicory are eaten as a vegetable or salad, or its roasted and ground roots are used as a flavouring additive in coffee.

In partnership with other Oxfordshire farms, we’re conducting an experiment over the next few months to determine ...

It was a wonderful experience to take part in the thought-provoking Real Oxford Farming Conference at Oxford Town Hall ...

One Dorset farmer is reliant on legumes to ensure high forage ...