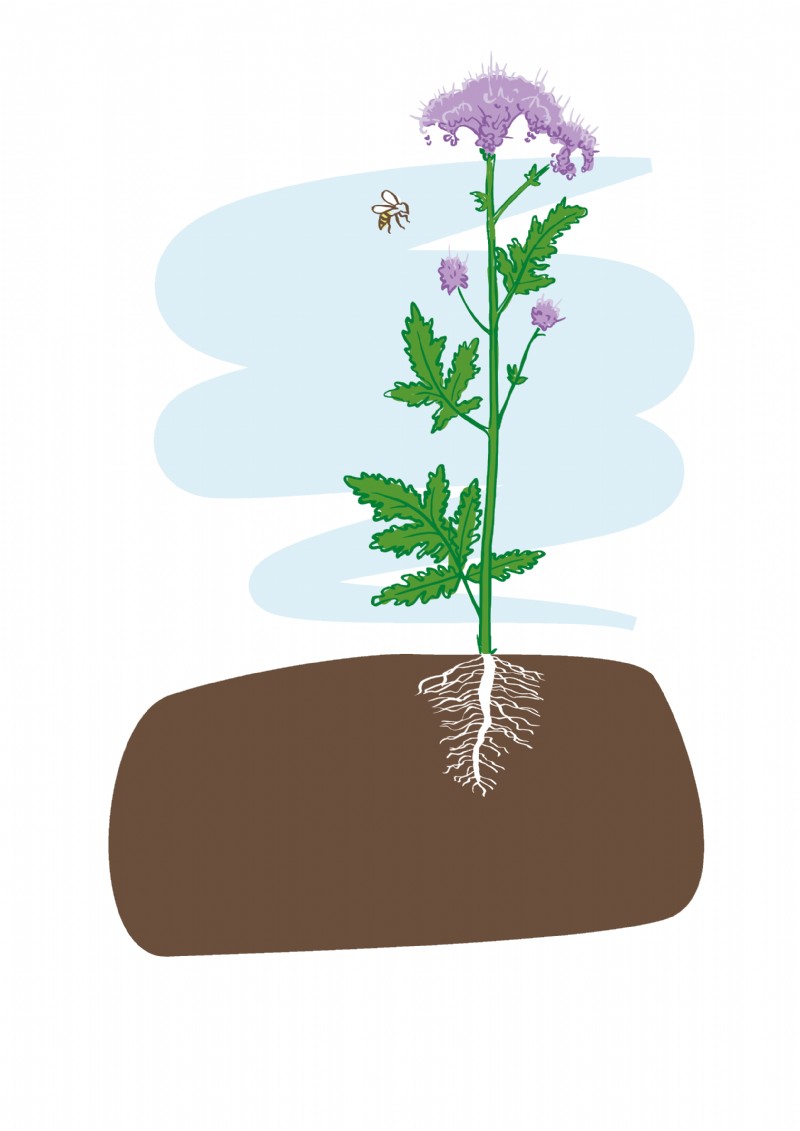 Phacelia is a rapidly growing, high biomass plant. It is a nitrogen holder and weed suppressor. Its eye catching purple flowers are particularly good at attracting bees and other beneficial insects.

Phacelia is effective at preventing nitrogen leaching and suppressing weeds, due to its fast establishment. Although not known as a deep rooted species, its dense zone of shallow roots are very good at conditioning the top 3-4cm of soil. It’s a good source of pollen and nectar for pollinators and other beneficals.

Phacelia may survive through very mild winters, however prolonged frost will normally kill the plant.

The seed of phacelia is very small, so it should be shallow sown, pure stands may become open later in the winter.

The vigorous nature of phacelia means it should not be used excessively in mixtures with slower growing species.

As it’s a quick to establish species, sow from spring until autumn after the risk of frost has passed.

Phacelia does not need topping and is generally free from problems with pest and disease. Phacelia can flower and set seed quickly, if seed shed is a risk, destroy at or just after flowering.

Seed
This is a particularly small and light weight seed, with an orange segment type shape. It is a uniform, dark brown cover and a coarse texture. The seed is 2mm in size.

Seedling
The seedling develops a pair of rounded, lance shaped, broad cotyledons. They are several times longer than their width, with a mid vein and short to medium stipules. The first true leaf is feathery with deeply divided, lobed leaflets.

Flowering Plant
This is an upright and multi branched, dark green and hairy plant. The leaves are deeply divided, with leaflets cut into small lobes giving them a feathery appearance. The inflorescence is eye catching, lavender to pale blue or white in colour, with pronounced hair like stamens. The root is shallow, with many dense, lateral side roots.

The seeds will only germinate in darkness, which means they should be shallow sown or harrowed and rolled well after sowing. Biomass production is prolific above ground but breaks down quickly after mulching as much of the canopy comprises a fine leaf structure, this may be a positive trait for direct drilling systems.

It can be combined in mixture with other fast establishing species like mustard, the annual clovers or buckwheat.

You can find Phacelia in the following mixtures

Suitable Soils The key to successful overseeding is to reduce the competition from the existing sward as much as ...

Mob-grazing is a term used to describe a method of frequently moving livestock systematically around a field to to ...

Lucerne varietal choice can be confusing. This is mainly because Lucerne is not native to UK soil, and therefore ...