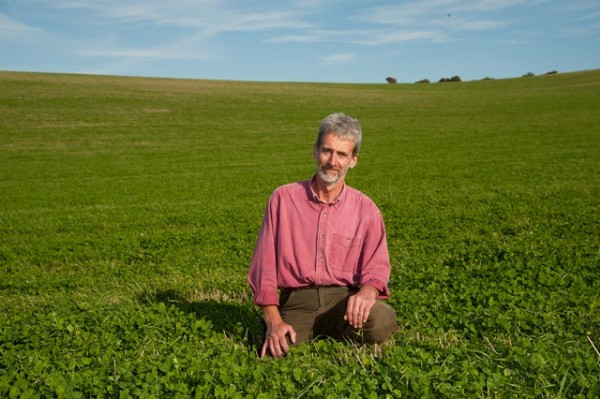 A rotational grazing system and regular topping is the secret to maintaining sward quality in the dual purpose leys grown by Robert Hyde on his light land. Sheep graze a sward for a fortnight before being moved to a fresh bite with a topper going in straight behind them to tidy up the aftermath. This ensures weeds never get away and nutrient levels are kept high.

To support the farm’s two sheep flocks, one milking, one meat, Robert needs leys to be flexible,  providing both excellent grazing and top quality silage and hay for the winter. The farm’s Dorset Down flock is the oldest in the world and the breed’s early lambing ability means he is fattening lambs for the profitable Easter market. Ewes are fed silage either side of lambing in December with lambs finished on grass and clover alone, so high protein levels in the sward are vital.

Protein is also key to his flock of 300 Friesland milking sheep which produces over 85% of milk from forage. Unlike the Dorset Downs, the milking sheep are housed over the winter, fed on hay and silage with a small supplement of home grown cereals. This means voluntary intake of silage must be very good to maintain milk yields and quality.

Two key ley mixtures are used on the farm. A long term red clover and tetraploid ryegrass mix which is sown after harvest and left in for two or three years. The leafy tetraploids are ideal for grazing and the sward’s protein levels are consistently high. Robert has never experienced a bloat problem grazing red clover, but always takes ewes off these leys well before tupping as red clover can affect oestrogen levels. Two or three cuts are taken each season with the quality of conservation critical to herd health and to the bottom line; a CP of 19% coupled with high voluntary intake is regularly achieved in big bale silage.

The second mix used is a combination of white clover, yellow trefoil and tetraploid perennial ryegrass which is undersown to arable crops in the spring, providing winter grazing post harvest. This bespoke mix has been tweaked over the years to complement the arable system and meet the needs of the sheep and has been very successful, even with the recent dry springs. These leys are mainly used for grazing but give a very good silage cut where there is surplus production before being ploughed in after two years.

The legumes in both mixes fix high levels of nitrogen and rotational grazing, topping and mulching ensures that P and K indices are always good across the farm, with extra FYM added on the lightest land. Organic matter levels are also very good, all of which underlines how temporary leys are the power behind both the sheep and arable enterprises on this farm.