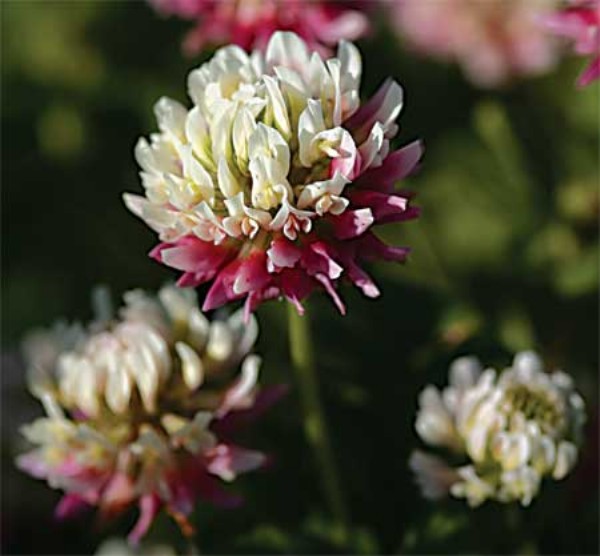 The most common clover type is red clover which is a valuable crop for both silage making and hay. It is very high yielding when grown with Italian ryegrass and will fix nitrogen so that no N fertiliser is needed. It persists up to four years.

Alsike clover (photograph above) also has a pink flower similar to, but not the same as, red clover. The species came from Sweden originally and seed is produced there and in Canada.

Alsike will grow on wetter and more acidic soils than red clovers. It can also regenerate through self-seeding. Like red clovers, it can cause bloat if grazed and is therefore primarily a cutting species. Formerly it was used for hay production sometimes as a companion to timothy. This will make really good hay on heavier and therefore often-moist soils.

The seed, as shown in the above drawing, is much smaller than red clover though bigger than white clover. The colour is light green to almost black. Red clover seed is a beautiful yellow to purple colour.  Alsike will grow at a lower pH than the other clovers and was formerly used to avoid “clover sickness” which arose from red clover being grown too frequently.