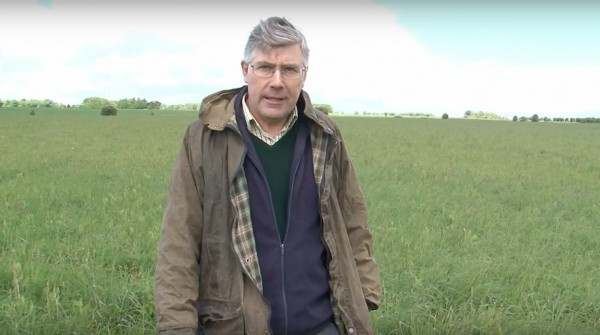 Charles Hunter-Smart has held the position of Farm and Estate Manager at Bradwell Grove for nearly 30 years, running a business which includes arable cropping, a beef suckler unit and a joint sheep enterprise. The decision to go into an organic system was taken 11 years ago in 2005, based on the idea of minimising risk. At a time when conventional prices were low, converting to an organic system was a safeguard to access a premium price for the crops and livestock produced. The common thread linking these diverse operations is enhancing the soil, which provides the building blocks for the cereal and forage crops.

Over the years there has been a sustained effort to increase soil fertility and a commitment to adapting the rotation to fully incorporate cover crops and grass leys. Short term plants like mustard or radish are used for slotting-in fast establishing cover crops at either end of the arable rotation, while longer term diverse mixtures of grasses, legumes and forage herbs are left in place for 2-3 years to really build root mass and organic matter in the soil.

This system of soil improvement has made the land easier to work, with less cultivation passes needed to achieve a fine seed bed. It has also increased the soil’s resilience to extremes of weather, causing it to act as a sponge after heavy rainfall but hold moisture in dry summers. Another advantage of the conversion has been the reduction in inputs costs throughout the system. Charles has been looking at ways of improving crop establishment and sustaining P and K levels, including using green waste compost as a soil improver.

Bradwell Grove is under the custodianship of the 4th generation of the same family and improving soil health is viewed as a crucial element of asset-building for future generations.

“One way to ensure future generations inherit an agricultural business with a profitable bottom line is to ensure that the land is in good heart".

The components of the longer term multi-mixture leys have been adapted over time as experience has shown that some species work better in different combinations or quantities and in different soil types than others.

The mixture includes grasses like cocksfoot, tall fescue and meadow fescue, which have a very good root system. This creates pore spaces and a large amount of root mass in the soil that breaks down over a long time. The mix also includes legumes such as clover, trefoil, lucerne and sainfoin, which fix atmospheric nitrogen into the soil, thereby reducing the reliance on inputs. Forage herbs with deep roots like chicory are also in the mixture as well as burnet, yarrow and ribgrass, which condition the soil and mine trace elements from further down in the soil profile.

The leys are undersown into a spring or autumn cereal in the spring to provide a cash crop whilst the ley develops, which reduces the amount of time land is left out of production, though grazing is a very useful by-product from these soil improving leys. The leys are left down for 2-3 years before returning to three years of cereal cash crops