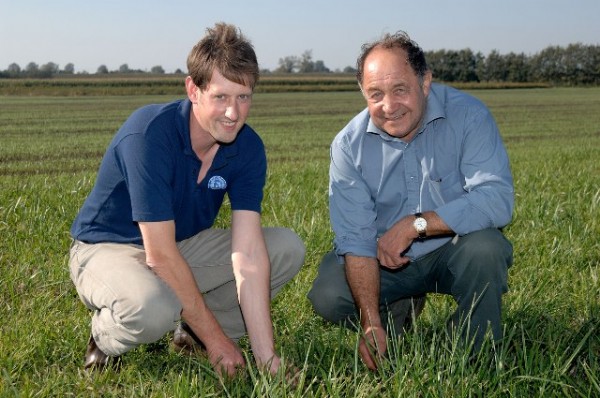 Green manures form a vital part of the rotation for both the conventional and organic areas of this farm, part of G’s, one of the UK’s largest salad and vegetable growing companies.

The two year Fertility Builder mix is used to boost the soil after vegetable crops have been grown for three years. With their high demand for nutrients, salads, beetroot and onions deplete the soil so using a green manure to give it time to recover is vital in safeguarding future high yields. The mix’s combination of clovers and ryegrass provide a break crop, reduce pest and disease risk, replenish soil organic matter levels as well as increasing soil nitrogen indices.

The mix is drilled post-harvest in August or September which means the clovers can get well established in warm soils before winter sets in. The farm has tried grazing the mix in the past, but now tops it with a flail mower every two weeks from early establishment onwards and mulches all the cuttings. Doing this prevents weeds from taking hold, especially in the organic part of the farm, increases organic matter levels significantly and improves soil quality overall. Constant mowing also encourages vigorous growth, particularly in the legumes, which increases the amount of nitrogen they fix and maintains the correct proportions of clover and grass in the mix.

Having used this mix in the rotation for a number of years now, both Adam and Roger have found that the subsequent cash crops are particularly vigorous, with testing showing that soil nitrogen levels are very good. On the organic side of the farm, no further fertiliser is normally needed after these leys, but chicken manure is applied to the vegetable crops if required. On the conventional side nitrogen fertiliser is used, but input costs are significantly reduced thanks to the amount of nitrogen fi xed by the mix while it is in the soil.

The Rye/Vetch mix is used on the farm’s sandier soils, where vetch grows particularly well, to prevent nutrient leaching over the winter months and improve soil organic matter levels, particularly on the organic land. After harvest the ground is cultivated and the rye/vetch seed then drilled and the area rolled. This is a low maintenance mixture which is then just left until May by which time it can be over three feet high. In May the mix is cut with a flail mower, mulched and then ploughed in, with the following salad crop drilled just a couple of weeks afterwards.

With salad and vegetables being some of the highest value farmed crops in the UK, maintaining soil quality through use of green manures is key, especially when farming on this scale.