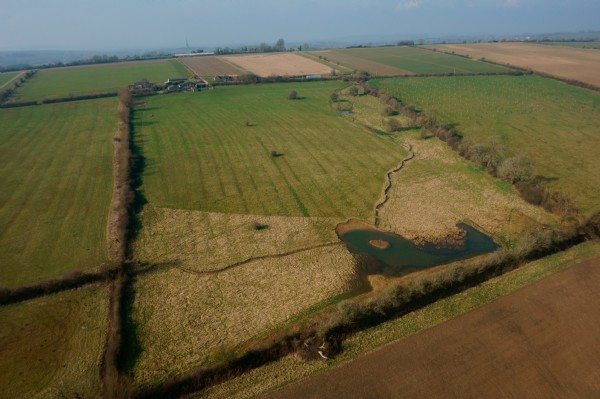 Natural flood management employs natural processes to reduce the risk of flooding and erosion and can be adopted by farmers, landowners, land managers and other stakeholders. As well as attenuating runoff, schemes also reduce the loss of fertilisers and nutrients from farmland

Examples of natural flood management techniques include improving a watercourse by restoring bends in rivers and changing the way land is managed so soil can absorb more water.

For instance, the natural flood management scheme created at Honeydale Farm works by holding up the flow of the water upstream and allowing it to be released in a controlled way, which can prevent flooding further downstream. The peak flow of water reaching the river can be lowered during heavy rainfall, reducing the likelihood of flooding.

The system involves several small leaky dams known as attenuation bunds, connected by short lengths of meandering channel. Water is held back by the bund until the level reaches a perforated stone dam. Once this has been breached the water runs onto the next dam, repeating the process. In this way the amount of water entering the river in one go is reduced. Once water over-tops the final dam it is collected in a shallow scrape where excess will drain away into the subsoil.

Water holding areas can be planted with trees to form an infiltration zone.  As the tree roots develop over time they create preferential pathways for water soakage to help excess water infiltrate into the subsoil. In addition trees themselves use up water to help them grow.

Increased flood peaks, low summer flows and increased pesticide and fertiliser burdens have all been identified as damaging impacts on rivers and natural flood management schemes can address all of these issues.  In addition they significantly improve local biodiversity, creating an important wetland habitat for local wildlife. There is also a significant element of carbon capture associated with the planted trees, which will provide a sustainable and valuable source of firewood in time.