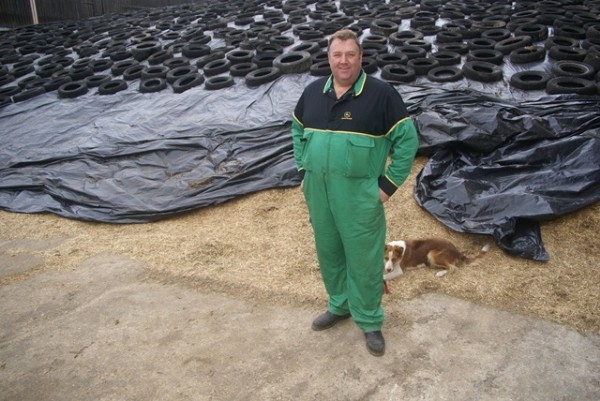 Each autumn around 60 acres of the mix is drilled after second wheat. After two years it is then ploughed in and followed by first wheat. Mr Smith uses a combi drill to establish the Italian ryegrass seed mix and then, after drilling, the seedbed is Cambridge rolled within 24 hours. Depending on the autumn weather, germination normally follows in less than ten days.

Once well established, sheep are put onto the new ley, which provides clean winter grazing for the commercial flock. The ewes encourage the grass to tiller well, so increasing its yield for the
following year. The sheep are taken off around Christmas to avoid poaching and the leys are then shut up until the spring.

Experience has demonstrated that premium silage and haylage come from different cuts at different stages of this ley’s growth. Mr Smith carefully manages this to ensure he hits his targets for yield and quality. The first cut, taken in mid May, is bulky which is ideal for silage and also helps to take out any volunteer cereals. The second cut is taken off in early July when the weather is usually better suited to making hay. The third cut then goes into the silage clamp around the second week of September.

Horse haylage is produced from the second cut of this ley in its second year when the grass is slightly finer and not as suitable for making premium hay. Each year Mr Smith makes around 700 big bales of haylage and 3000-5000 small bales of hay, plus 1200 tonnes of silage for the 400 store cattle which are on farm for the winter before going off to a specialist finisher. The store cattle are fed just a little biscuit meal, minerals and straw along with high quality clamp silage. Mr Smith aims for 30 to 35% dry matter, crude protein of over 12% and a D value of around 68%.

With the high yields required by Mr Smith, fertilizer application is key. 300kg/ha of 0:26:26 is put on in early spring, followed by Double Top to get the crop started. Then a further application of
straight nitrogen is applied to achieve first cut. For the second cut a compound fertilizer is applied and for the third straight nitrogen is used. As it is crucial to avoid any residual nitrogen in the grass, Mr Smith always allows around a week for the nitrogen to be used up before mowing all cuts.

In addition to their high productivity for animal forage, these leys are a vital weapon in Mr Smith’s battle against blackgrass. With the first cut taken in May, any weeds – including blackgrass – are taken off the field before setting seed (it is much easier and cheaper to control these in grass than in cereal crops). This then cleans up the field for the second haylage cut, and for subsequent arable cropping, underlining just how vital this mix is in all its roles.