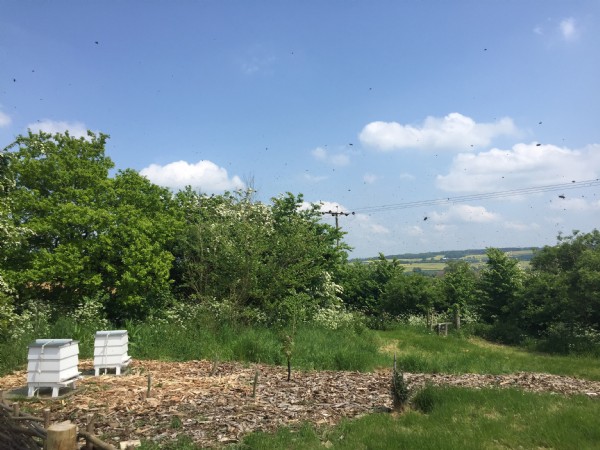 When Paul arrived at Honeydale Farm to check the bees this weekend he found thousands of them swarming all over the apiary and immediately contacted beekeeping mentor Chris Wells for advice.

Swarming is natural and common at this time of year. In fact Chris said that it had been ‘a very swarmy day.’ In a normal year, this behaviour is managed by regular monitoring, and an artificial swarm can be carried out if necessary. What’s complicated the situation at Honeydale is that the bees have been behaving unpredictably all Spring due to the mild winter, cool March/April and erratic weather ever since, so monitoring them has been tricky and swarming difficult to predict.

Two swarms were found hanging from branches in the trees behind the hives, the largest one 3m high. One of the hives is being left alone while a new queen is created, so Paul’s first task was to perform an inspection of the other hive. He destroyed the incomplete queen cups but left the fully formed ones in situ as they will be needed if this hive proves to be the one that has swarmed and thereby lost its queen. Paul didn’t find the queen in the hive, but the good news is that there were still plenty of bees.

Paul then needed to gather the swarms. He took a brood frame from the strongest hive and put this into an empty nuc box - the containers in which nucleuses of bees first arrived at Honeydale, which Paul had fortuitously kept. Chris Wells had told him that any cardboard box would suffice, effectively mimicking the traditional bee skep, domed baskets which were used by beekeepers for centuries.

Paul had to climb on the top of the pick up truck to reach the main swarm which he shook off the tree into the nuc box. He placed this upside down on the ground at the base of the tree before he repeated the procedure with the other smaller swarm.
He left the boxes to settle and noticed a third swarm in another tree. This has been left alone until Chris visits with Paul early next week to decide what best to do next.
Date Posted: 1st June 2016