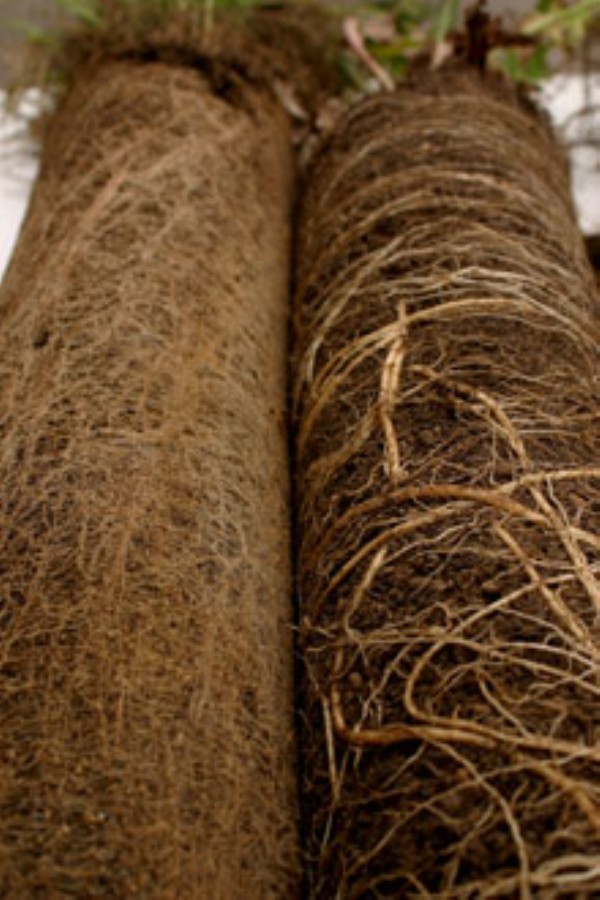 The trace element content of forages varies widely depending on a range of factors. Soil type, soil pH or acidity and alkalinity, species of forage, stage of maturity and fertiliser use all have an influence on the trace element concentration of forages. It is important to emphasise that a tremendous variability in trace element concentration of grasses and legumes exists in field studies conducted in the UK and in countries throughout the world. Nevertheless the broad trends are important providing it is accepted that there are many exceptions.

Heavy, clay soils will generally have a higher trace element profile than a light, sandy soil and the plants growing in these soils will reflect the difference. Assuming pH 6.0 is ideal for grass growth, then the content of most trace elements will be higher in grasses growing in more acidic soils, but if anything slightly lower at neutral (pH 7.0) or alkaline pH levels. The important exception is molybdenum for which the reverse is the case and this has important implications for copper availability in the ruminant as discussed later.

An examination of mixed swards showed that the concentration of most trace element in herbs and weeds was approximately double that of grasses, with clovers somewhere in between. However, grasses tend to have higher selenium content than legumes. Leaves are richer sources of trace elements than mature stems although flower heads have similar copper and zinc content to the leaves. Maturity often leads to a decrease in trace element content.

In general, fertiliser use, especially nitrogen, reduces trace element concentration in grasses as a result of dilution effect due to greater dry matter production, but also as a consequence of soil trace element depletion over time.

Grazing cattle and sheep rely on the sward providing their trace element requirements, but if the supply is less than the guidelines given, a degree of deficiency will manifest itself. In the case of a sub clinical or slight deficiency, the effect is likely to be invisible to the naked eye, but a 5 to 10% loss in production, whether that be milk or meat, could result. Of course, more severe deficiencies are visible and in extreme cases, death is the result. Modern grassland farming systems using productive swards to increase animal output are gradually depleting trace element reserves in the soil and unless trace elements are returned to the land, constant withdrawal will upset the balance.

Each of the trace elements referred to in the introduction is examined with emphasis on deficiency problems in livestock.

Copper
Probably the most complicated and controversial of the trace elements under consideration is copper. Copper deficiency in cattle is characterised by a lightening in the coat to a rusty coloured due to inadequate melanin synthesis. But not all cattle carrying such a coat are suffering from copper deficiency since breeding also has an influence. In classical cases there is a loss of hair pigment from around the eyes giving a spectacled appearance or panda eyes. Anaemia leading to stunted and unthrifty growth, together with scouring, often accompanies the coat colour change. In the lactating animal, milk production and quality suffer, and a breeding animal shows weak oestrus making heat detection more difficult, often leading to a reduced conception rate.

In sheep, swayback is due to lesions in the brain stem and spinal cord preventing the lamb walking on its hind legs. Lambs are often born with the condition due to inadequate copper nutrition of the ewe, or it can develop after the lamb is a few months old and subjected to a copper deficient diet.

Copper deficiency is normally considered to be either of a primary nature caused by a low copper content in their feed or else secondary due to the interference of antagonistic elements on copper availability. The main antagonists are molybdenum, sulphur and iron, which interfere with copper uptake and use within the animal. To start with, molybdenum combines with a sulphur in the rumen to form a thiomolybdate compound which complexes with copper and is excreted so denying the ruminant that portion of copper. Thiomolybdate also enters the blood and attracts copper from enzymes, which inactivates them, and from copper chelated with amino acids. The wasted copper complex is then excreted through bile or urine or else stored in the liver.

There is a great debate about whether this process actually causes copper deficiency due to the molybdenumn antagonist or perhaps molybdenum toxicity requiring copper for detoxification. The evidence for the latter is very persuasive. What is certain is that a regular supply of copper is required in the rumen and also the small intestine so that sufficient is present in the rumen to complex with molybdenum and enough is available at the cellular level where it is required.

Cobalt
Cobalt is required for the synthesis of a vital vitamin, namely B12 (cyanocobalamin), by microorganisms in the rumen. This vitamin plays a key role in both energy and protein metabolism and a deficiency means that the suffering animals, usually weaned lambs, are unable to benefit from the grass and clover they consume. A condition known as pining results in a progressive loss of appetite, anaemia and poor growth and in severe cases actual weight loss.

A low cobalt level in pasture is the obvious cause, but a high manganese content of the soil combines with cobalt to reduce the amount absorbed into the plant. Cobalt is unusual in that the concentration in soil is usually several times higher than in pasture. Therefore in a wet season when grass is contaminated with soil, this often protects against pining, as does direct soil ingestion by lambs.

In lactating and breeding stock, cobalt deficiency, while less common in young animals, can reduce milk production and depress fertility. Also deficient stock is more susceptible to picking up an infection.

Selenium
Selenium is linked with vitamin E and their main function as antioxidants is to deal with the peroxides or free oxygen radicals that accumulate in the body from normal eating or exercise. Vitamin E helps to prevent their formation in the first instance while Se detoxifies them through the action of a selenium-enzyme glutathione peroxidise.

Sulphur is now more frequently applied to grassland, particularly silage ground, because of the decline in sulphur deposition from the atmosphere, can reduce the amount of selenium being taken up by plants. Therefore as we have witnessed with copper, excess sulphur can exacerbate trace element deficiencies.

A proportion of the selenium absorbed by the plant becomes part of the sulphur-containing amino acid methionine (selenomethionine) and cysteine (selenocysteine) which are efficiently used by ruminants and probably better than inorganic selenium.

Selenium deficiency influences muscle growth and in young animals the condition of white muscle disease or muscular dystrophy results in the muscle being drained of colour. This leads to a very stiff walk in affected animals. In cattle after calving, due to reduced muscle power in the uterus, there is an increased incidence of retained placenta. Antibody response is also weakened when challenged by an infection such as pneaumonia, mastitis or worm burden.

Zinc
Although zinc is required by very many enzyme systems involved in carbohydrate, protein and lipid metabolism a deficiency has an effect on the exterior of the animal. The skin develops dry, crusty, scaly patches with hair loss and in sheep the fleece quality is sub-standard.

Both cattle and sheep develop feet problems because of poor hoof strength and lameness. Splitting and ulceration of the interdigital skin between the claws makes walking uncomfortable and therefore grazing time is reduced which has a negative effect on performance. Fertility in the male may also be depressed because of a reduction in sperm production.

Iodine
Iodine is a component of the hormone thyroxine, which controls the general metabolic rate of an animal. Pasture is invariably short of this trace element and ingestion of goitrogenic substances including kale, turnip and rape further depresses thyroxine synthesis.

The classical sign of iodine deficiency is an enlarged thyroid gland known as goitre, which develops as the body tries to compensate for a low iodine supply by increasing the size of the dependent gland. Because of a reduced metabolic rate, milk production, growth rate and a reproductive activity, due to an irregular oestrus, all suffer. A greater number of stillborn or weak calves and lambs are born after giving birth, cows have a greater tendency to retain their placentas.

Forage as a Trace Element Supply
Now that we have established how utterly fundamental trace elements are to livestock health and production, how can we make sure that every grazing animal receives an adequate supply? One method, which has gained increasing acceptance in the UK and Ireland, is to treat the grass itself with a granular mix of the trace elements coated on salt crystals. Only one application is required each year usually in the spring, to last for the complete grazing season. This technique has several advantages over other methods. Each animal benefits every day and indeed with each mouthful of treated grass while grazing, rather than expecting it to select from a free access source. Labour saving, stress-free and yet demonstrably efficient are adjectives that have been used by farmers to describe pasture treatment with trace elements. Of course the New Zealanders, who are very knowledgeable about grassland management and the Finns have applied selenium to their soils successfully for many years. When you think about it, what could be more natural than making use of growing grass to carry the necessary added trace elements into livestock?