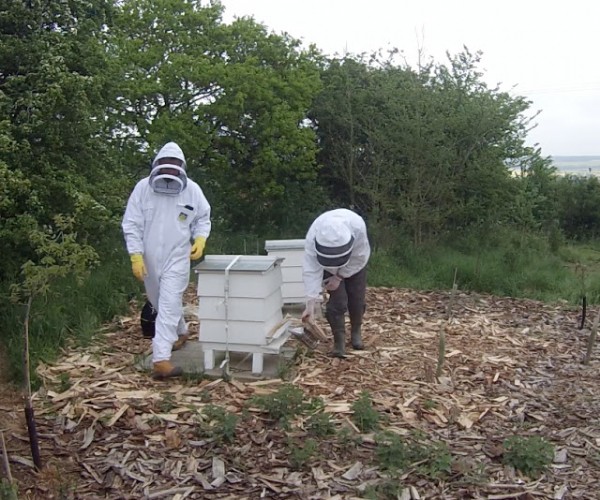 Last week we reported that the bees at Honeydale were behaving rather strangely with one hive bursting with bees and the bees in the second hive preparing to swarm.

Paul’s beekeeping mentor Chris Wells has now been to assess the situation which has moved on a pace.

The hive that was full of bees last week, has now completely filled the extra super Paul added last week with approximately 10kg of honey. So yet another super has been added. The nearby rape fields are likely to be the reason for this early bounty. The bees in this hive are also now trying to swarm with lots of queen cups, some of which are sealed in readiness for a new queen to be created. The queen cups have therefore been removed and we are keeping a close eye, checking the hive every seven days to prevent swarming. If the colony continues to try and swarm, then we will need to perform an artificial swarm to maintain the colony.

The second, previously emptier hive, in which the bees were also preparing to swarm a week ago is still trying to swarm but the queen has been lost or has died and as a result the bees are behaving quite aggressively. Some of the brood frames have been removed and replaced with empty frames to provide more space and the queen cups here have been left in place so that a new queen can be created. Honey production will be delayed for at least three weeks and the hive will not be opened during this time, but otherwise the hive is active and healthy, if a little perturbed.

Overall there is a healthy number of bees in the hives and things are looking good. In light of the recent honey production and good weather we now need to increase the height of our ‘WBC’ hives to accommodate more supers as the season progresses and honey production continues. Paul will be ordering in the necessary items and building the extensions soon.