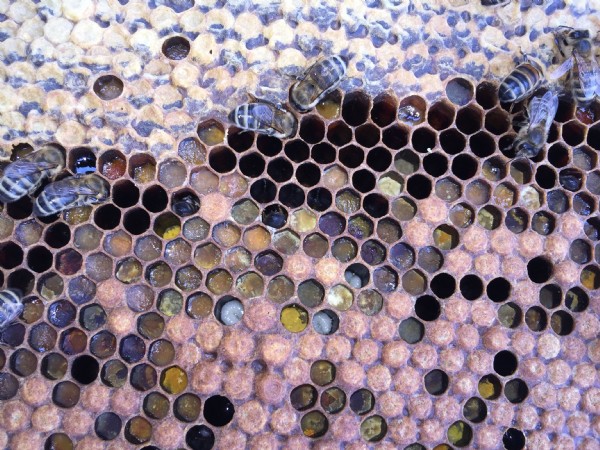 The Honeydale bees have been busy! Paul and Chris Wells carried out an inspection today and discovered that the ‘special measures’ hive has reacted well to the new queen, introduced earlier this month. She is healthy, laying lots of eggs and with plenty of brood present...

and had her wings clipped.

All is looking very good and a mass of beautifully coloured pollen has been collected.

Some of the bees have deformed wing virus.

This is not unusual, but is an indicator that some varroa is present. The bottom board of the hive was checked and varroa was found, along with wax moth grubs, so this will be kept under supervision and may have to be treated for varroa.

Hive 1 (to which we added several additional supers) has now produced an impressive 30kg of honey so far [see pic], with some perfect honey-filled frames.

No queen, eggs or brood were visible though, but the calm temperament within the hive suggests the queen is not too far away and is still active. The colony have polished a lot of cells which usually means they are preparing for the queen to lay eggs. Another inspection will be carried out at the end of the week to see if she can be found.

The swarm box is still confusing us. It has a healthy number of bees but no brood or eggs. However the bees are displaying a healthy temperament so it’ll be left for another week and inspected again. It may be necessary to introduce eggs into this hive to stimulate the bees to create a new queen and it may then be possible to develop a new colony from this swarm we’ll have to watch this space.

The Honeydale bees already have company, as Chris Wells has now brought some of his bees up to the farm. There are currently four nucleus boxes there, with more to follow.

Once the bees have acclimatised they will be transferred to some more permanent national hives at the end of the week. Having seen the honey production from our hives, Chris is very enthusiastic about having his hives at Honeydale and looking forward to lots of honey.