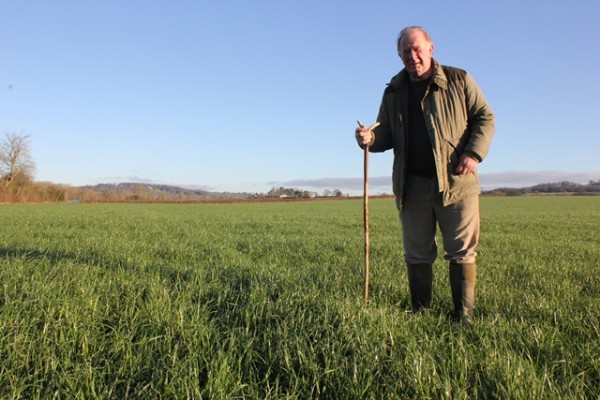 January is a good time to take a close look at autumn–sown grass seed mixtures to see how well they have established and how the winter weather has affected them.

Many leys that got off to a good start in August and September have benefited from the mild winter to date and are now looking extremely good. Although farmers like to see a well-established ley, there is some risk that they can be ‘too good’ at this time of year.

One hay and haylege grower, Robert Phipps in Wyck Rissington, Gloucestershire, has found that his September-sown Italian ryegrass is almost shin height and has clearly been growing new leaf during recent mild temperatures. A pre establishment application of 8t per acre of chicken manure has also given the ley a good start.

To avoid possible frost damage, Mr Phipps has decided to put some sheep on to the ley to graze the new grass down and encourage tillering. The sheep will stay on for two weeks and then the field will be shut up until an early bulky cut in May. The field was well consolidated when sown so the ground is good and firm meaning frost lift (a damaging condition in new leys) is unlikely.

In other situations young grass sown in the autumn can look poor during first winter but will often come good given enough time.  If in doubt it is a good idea to look very closely at the number of plants and assess how many seedlings are visible and how close together they are.  A single ryegrass plant can cover a man’s hand given time (ryegrass seedlings can be identified by their shiny backs and purple bases). Even very small seedlings eventually become mature plants and what appears to be an insignificant take can be fully productive as long as they survive to become a full crop.

In mixed leys clover plants that are an inch high by now should survive the winter well and most clovers seem to have established well this year. The only exception seems to be where this small seeded legume has been sown too deep so struggle to get through.

Any fields that have not taken well enough may need over seeding but it is too early to judge this just yet.  It is best to wait a month or so to reassess with any overseeding then carried out when the temperature rises in late February/early March.