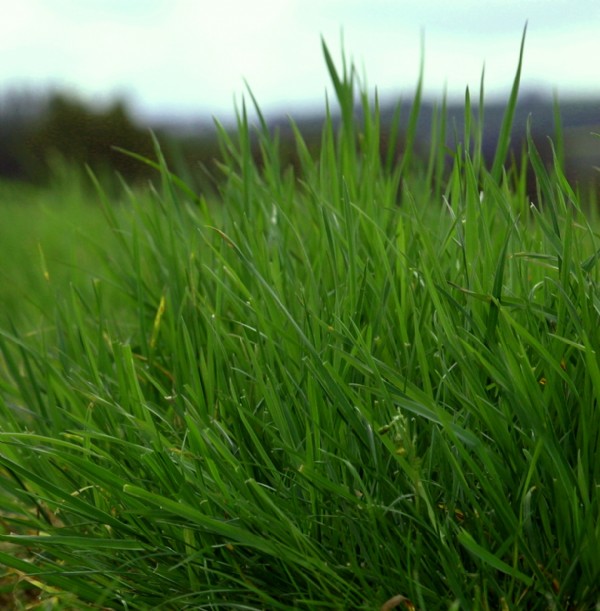 This article considers whether farmers should grow cocksfoot (Dactylis glomerata) on dry soils as an alternative to ryegrass. Ian Wilkinson, Managing Director of Cotswold Seeds explains why, as we enter a new agricultural era, we need to reconsider grasses such as cocksfoot.

You could be forgiven for thinking that all UK grass is ryegrass. You wouldn't be far wrong. Every year some 12,000 tonnes of ryegrass seed is sown here. Compare this with the miniscule sales of other forage grass species such as cocksfoot, timothy and fescues and it's easy to see why ryegrass gets all the attention.

However, there are some farms where ryegrass is not the right choice, and an alternative would be better employed. Cocksfoot is a good example of an alternative species as it is significantly different to ryegrass and offers a range of benefits - but does have some disadvantages.

The Great Historical Debate
Unlike the other more modest members of the grass family, cocksfoot has always sparked much debate amongst agriculturalists. Since its introduction from North America in 1763, Orchard grass, as it was formerly known, has made many friends but nearly as many foes. The reports from England in the 18th century make interesting reading. They start with Bartholomew Rocque who, on being given cocksfoot seed by the then Committee of Agriculture in London, wrote two years later that the grass was 'very coarse, but very sweet and of great growth'. W. Sole however, condemned cocksfoot and wrote a scathing report in his 1799 account of the principle English grasses, saying 'that it was refused by all cattle!'.

There were many other references some years later when the species became more widely grown. More positively, A. Young, in his account of 'Norfolk Agriculture in 1804' said 'cocksfoot provided sheep with a palatable feed which did not burn up in the severe drought of 1800.'  G. Turner in his 'Agriculture of Gloucestershire' said, 'cocksfoot springs directly after the sythe in mowing grounds…and from the stock lying on it and paring it down it seems very palatable to them'. Later accounts from seed merchants M. J. Sutton and J. Hunter, began to emphasize that the more positive results were coming from cocksfoot-based leys which received 'proper' management.

It must be remembered that these accounts were opinions that were often many times removed from the initial field observation by the farmer. They certainly did not benefit from the scientific data we have today. The most relevant accounts of cocksfoot leys were from R. H. Elliot who pioneered the Clifton Park farming system and W. Lamin who wrote his account of 30 years of growing cocksfoot-based leys in 1943. Both these men appreciated the benefits of cocksfoot. They realised that its deep, penetrating roots not only provided forage during dry times but also improved the soil by increasing its humus content. This was of great importance, particularly to Lamin who farmed on drought-prone, sand land in Nottinghamshire. They sowed quite complex seed mixtures that contained other deep rooting grasses, herbs and clovers. They omitted ryegrass. The results proved to be better than ryegrass leys and helped promote the use of cocksfoot.

However, at around the same time, the widespread introduction and use of artificial nitrogen fertilizer led to ryegrass becoming the UK's favorite. Not surprising, as ryegrass responds better to the application of artificial nitrogen than any other grass - soil moisture allowing.  Today, with an increased cost of fertilizer and a decreased price for milk and meat products, there is an urgent need to lower the cost of production. One way to do this is to grow forage less intensively, reducing nitrogen fertilizer inputs and thus opening the door for the alternative grass species.

Will Cocksfoot provide Quantity and Quality Forage?
The value of any grass to the animal depends on how much of it is eaten and what it contains. As a grazing grass, cocksfoot is quite palatable when young and has a D-value similar to ryegrass. Palatability falls as the grass matures and, for this reason, it is important not to undergraze cocksfoot leys once established. It is fair to deduce that cocksfoot is better suited to grazing as it is inclined to become clumpy if left to mature too long for silage or hay production. This clumping habit can make the grass less palatable, but usually takes place over the medium term.  Therefore cocksfoot leys are best grown for three or four years only.

A three year research programme at The Rowett Institute in the late 1960's compared dairy cow performance on pure stands of cocksfoot and ryegrass. The results showed little difference in milk yield or milk composition. There was no difference in the liveweight changes of the cows. Both species received high levels of artificial nitrogen fertilizer. Perhaps due to this, the ryegrass yield was higher. Overall grass yield was the main difference between the two species. What though would the results have been if lower levels of N had been used or the experiment had taken place on dry land?

The Place for Cocksfoot
Cocksfoot will grow on soils ranging from the lightest sands to wet clays, but the place to fully exploit its potential is on drought-prone land. When used in conjunction with other forage grasses and clovers, it can make a wonderful sward. Cocksfoot grows early in the spring providing a palatable early bite suitable for lambs, and it is the quickest grass to recover afterwards. Walking across a previously grazed field, its presence can be observed by virtue of its leaf shooting ahead of competition. In summer drought it excels, especially when grown with drought-resistant legumes such as red and white clover.

The Soil Benefits
For the past fifty years or so our concentration has been focused on what develops above ground rather than what goes on below the surface. Effort spent improving topsoil and subsoil is always helped by deep rooting varieties of plants and herbs which improve all soils.

Plant roots that penetrate to a great depth vastly increase the 'natural plumbing' of the land. This allows both water and air to move deeper into the ground, reducing surface saturation and speeding drying time. It also allows the surface soil temperature to increase at a quicker rate, facilitating faster recovery and establishment of grassland. Creating a soil profile with an increased water-holding capacity can not only help to reduce run off and lessen the effect of flooding but it can also provide a valuable reserve of moisture in a drier time.

Tap Roots
Tap roots allow a passage for air to reach deep into the subsoil, increasing the lung capacity of the earth. As the water table rises and falls throughout the year, by virtue of atmospheric pressure, the ground expels and inhales fresh air. This freedom of air movement through the soil is of paramount importance to the leguminous plants which are often grown with cocksfoot. Nitrogen is absorbed through the roots of the legume into the nodules where rhizobium bacteria convert it into soluble plant food. Constriction of aeration can greatly impede the growth of legumes and reduce the production of soluble nitrogen. This lung action also supplies oxygen to the micro-organisms that break the organic matter down into humus, sustaining the conversion of dead plant and animal matter into available plant food. Marvelous, natural chemistry!

Although there is little scientific evidence, there is much made of a deep rooting plants' ability to unlock and draw minerals and vitamins from the soil. These elements are beyond the reach of the shallow rooted ryegrasses, but for cocksfoot and deep rooting herbs it is possible to transfer these to the surface where they can be consumed by the grazing animal.

How much Cocksfoot?
Cocksfoot should be included in seeds mixtures at between 3 and 6 kilos per acre. (7.5 - 15 kg per hectare.) It is unusual to grow cocksfoot as a pure stand. It is more often added to a ryegrass/timothy/white clover ley at around 3 kilos per acre, in lieu of some of the ryegrass. This is a compromised mixture, some would say, providing neither one thing or the other.

It would be much more exciting to reduce the ryegrass or leave it out altogether. Mr J. R. Hargreaves in Nottinghamshire does just this. For some years now Hargreaves has grown cocksfoot leys with little or no ryegrass. He has light gravel land and is in a low rainfall area.

The farm comprises a Friesian dairy herd, a sheep flock and arable. The cocksfoot leys are used for the production of silage for milking cows and also late autumn/winter grazing for the sheep. They are sown for four years. The reason cocksfoot leys are grown at Thorpe Fields Farm is to guarantee production of grass through the spring and summer. It is usual to take a first cut of silage in the first or second week of May followed by a second and often a third cut. 'On my light land,' Hargreaves says, 'ryegrass just runs to seed and has no bottom. The second and third cut of cocksfoot however just keeps producing leaf providing it is cut frequently. There are no problems with bloat, which is surprising given the amount of clover we grow with it'.

Leys are usually sown after winter barley and consist of cocksfoot, white clover, red clover, burnet and chicory. Occasionally a small quantity of Italian ryegrass is added as a cover crop to boost yields in the first year of production. However, if they run to seed they have a nasty habit of reappearing as weeds in the arable rotation.

The arable crops are also helped from the preceding leys according to Mr Hargreaves. He states: 'the crops which follow the cocksfoot leys benefit from the decaying roots which are ploughed in as a soil improver. This has the effect of increasing the soil's ability to hold moisture.'

Hargreaves has based his farming system around Lamin's ideas. A typical mixture as used by Lamin is detailed below. ‘Lamins’ Deep Rooting Seed Mixture:

To establish such a mixture it is essential to prepare a well-worked seedbed, as some of the seeds in this type of mixture are quite small. Broadcasting followed by a light harrow and heavy roll should spread the seed evenly and leave the seed near the surface.

The other important factor to consider is time of sowing. Unlike ryegrass mixtures, which tend to forgive late sowing, the cocksfoot ley should be sown by mid September. Later sowings are vulnerable to weed competition and are best avoided.

Summary
It seems strange that the majority farmers in the UK have shunned alternative species such as cocksfoot when there are so many benefits to be obtained from them. Nevertheless, ryegrass is reliable and on farms where rainfall can be relied upon throughout the growing season it is likely to remain the species of choice.  However, elsewhere, alternative grasses could well find a new home. So, perhaps cocksfoot is not so much a black sheep - more a dark horse.

Species of the Week: Plantain