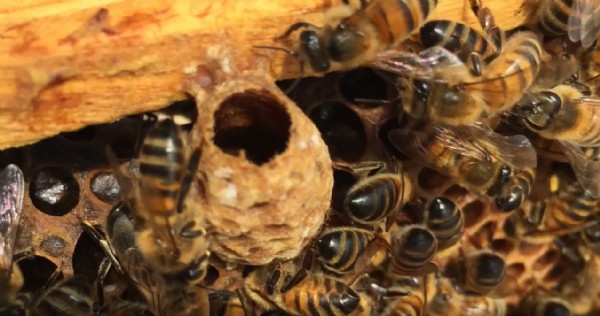 The two hives at Honeydale have been under close supervision for the past couple of weeks and today we performed another inspection on hive 1, the hive which is not under special measures. We did not find a queen but an empty queen cup was discovered, having been vacated by an emerging queen. The rest of the hive was also displaying behaviour which indicated that a queen has recently been produced and will soon be laying eggs. Polished brood cells were found which indicates that she is probably off mating and will soon return to the hive, when it will be business as usual. Once she is back we will find her and mark her with a coloured spot.

During the inspection, bee mentor Chris Wells removed a sealed queen cup with a virgin queen inside which was set aside. Other sealed queen cups were found but the queens inside had been killed by the emerged queen.

The second super is now also full, so we have added another super and another lift, meaning this hive now has three supers on it and around 20kg of honey so far.

We also performed an inspection of hive 2 - the one in special measures. Bee numbers were vastly reduced and many emerged queen cups were found, though no sign of the actual queen, suggesting this hive has swarmed, or at least has tried to. It is possible that one of the the swarms found last week was from this hive. We left a sealed queen cup in situ to allow a new queen to be produced and the hive can continue to develop as normal. As an insurance policy, should the queen cup fail to successfully hatch a queen, we introduced the virgin queen from hive 1 into hive 2. This hive will be inspected again in a week or so to see what happens next.

We then turned our attention to the swarns. The main swarm box, in which we placed a brood frame from hive 1, has lost some bees but there are still a healthy number remaining. We were unable to find a queen but the the temper of the colony and 'fanning' behaviour of the bees suggested there was one present somewhere. We are leaving it alone for now, to see if the colony develops and if a queen is apparent next time we inspect. The best case scenario is that we end up with another colony and therefore can start another hive, although it’s quite unlikely this colony will survive if there is no queen. We’ll inspect again next week and see if we can find the elusive queen.

The other box was empty so this swarm has been lost and similarly the swarm left in the tree has moved on.

But there will definitely be more bees arriving at Honeydale this week. The Sainfoin has just begun to flower and and the bees are flocking to it like...well, like bees round a honeypot! Sainfoin is such a popular plant for bees and produces some of the best honey, so Chris has been eagerly waiting for it to bloom and now that it has, he will be installing five of his own hives in our apiary.